Donald Trump’s election has left political pundits, data journalists and political scientists scrambling to explain what made his victory possible. Particularly puzzling is Trump’s triumph in the Republican primaries despite widespread opposition by the party establishment.

Some believe Trump prevailed because of a fragmented Republican field that left the party elite unable to decide on a nominee during the invisible primary. Trump capitalized on establishment disarray by mastering earned media. He dominated news cycle after news cycle, which allowed him to get his message out to his supporters for free, while his opponents had to rely on expensive television ads. This allowed Trump to rise above the pack.

If this is the case, Trump’s takeover of the Republican Party may have been possible only because his unique combination of wealth, celebrity and talent for controversy that allowed him to hijack media coverage of the race.

It’s not so hard to manipulate the news media

But is manipulating the news media really so hard to do? Maybe not. My analysis shows that the Canadian news media is busy creating its very own version of Donald Trump. Her name is Kellie Leitch.

After running the country for almost 10 years, Canada’s Conservative Party was defeated in the 2015 federal election. As a result, its leadership is currently up for grabs, in a race that began unofficially in April and will be decided on May 28, 2017. One candidate has already withdrawn, leaving 14 in the race. More may enter in the coming weeks.

In the campaign’s early stages, Peter Mackay and Jason Kenney, senior ministers in the former Conservative government, were considered the front-runners. Both, however, declined to run. Former industry minister and self-described libertarian Maxime Bernier stepped into the void. He worked to dominate the campaign with a string of policy announcements that burnished his free-market credentials and social liberalism.

Enter Leitch. She is a former pediatric surgeon and minister of labor and status of women, best known for announcing the Conservative’s “barbaric cultural practices hotline” proposal during the 2015 federal election. The policy was widely panned for being a brazen attempt at dog-whistle politics designed, in part, to bolster support for her party at the expense of the center-left New Democratic Party in Quebec.

As a result, she offered a tearful apology for the policy in the summer. Although Leitch was the first to enter the race in April, she failed to gain traction and badly trailed other contenders in opinion polls.

Then, at the beginning of September, Leitch proposed screening immigrants and visitors for “anti-Canadian values.” She turned even more sharply toward populism by railing against “elites” in the media and the Conservative Party and gained more media attention by hailing Donald Trump’s victory, saying that it was “an exciting message that needs to be delivered in Canada as well.” Leitch is now a front-runner in the leadership race, according to opinion polls — a development that occurred in as little as two weeks after her values screening proposal was introduced.

Why? Because she came to dominate the news media.

Here’s how I researched this

I downloaded all newspaper articles on the Conservative leadership race between April 1 and Nov. 20, from 23 different Canadian newspapers. I created dictionaries to use with the automated content analysis software Lexicoder to count mentions of each leadership candidate and major policy platform commitments that were mentioned in coverage. That included Leitch’s “values screening” as well as policies proposed by Maxime Bernier and Michael Chong, the field’s two leading policy wonks, and Brad Trost, the standard-bearer for social conservatives. 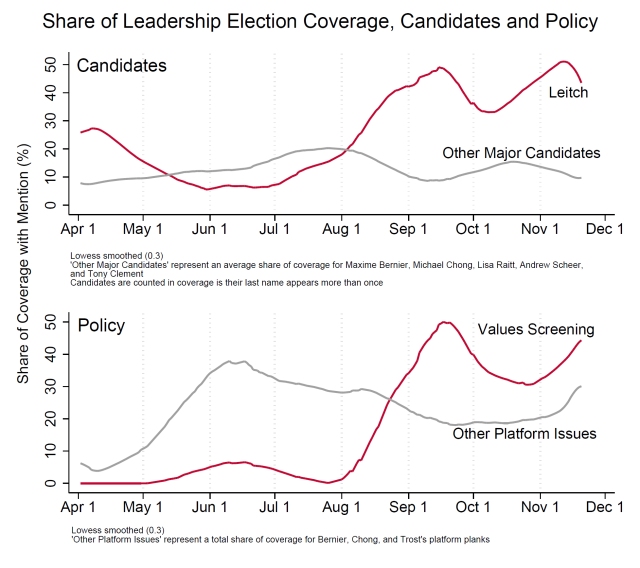 The figure above plots the share of newspaper coverage dedicated to candidates and policy over the course of the campaign measured daily. In the top panel you can see that Leitch got little coverage during the summer. But once she started talking about screening immigrants for “anti-Canadian values,” her average share of news coverage jumped from 13 percent to 47 percent.

The bottom panel shows this coverage focused on her “values screening” proposal. That began to overwhelm discussion of the policies of Bernier, Chong and Trost.

Leitch is benefiting not just from a larger share of coverage, but a greater volume of coverage to get her name and message out to potential supporters.

Much like Trump, Leitch has come to dominate media coverage of a fractured field and crowded out her competitors and their policy proposals — especially Bernier. Unlike Trump, this has been secured by a single controversial policy announcement, rather than by celebrity or never-ending personal controversy.

She could still lose, of course.

None of this means Leitch will win the leadership race. There is no open primary system for the Conservative Party leadership. It features certain rules, like the need to purchase a membership to vote and a ranked ballot that put a premium on ground organization and the ability to win second choice votes. Earned media does not matter as much in Canada as the United States for party leadership races.

It does, however, show that manipulating the press to gain widespread attention in nomination races may be much easier than previously believed. It may not require someone of Donald Trump’s unique profile.

It may just take a candidate willing to do or say anything to generate outrage and attract the news media who, for their part, are rewarded with readership for covering rhetoric or ideas that are shocking or even downright odious.

Kellie Leitch is no celebrity. She hails from the moderate Red Tory wing of the Conservative Party, and by most accounts does not believe her own rhetoric. But her stance may help her win. And for the Canadian news media, anointing someone a homegrown Trump may be too intriguing — and click-worthy — to pass up.

Kellie Leitch may rail against the media elite, but much like Trump, her candidacy is its creation.